Falling off the stage. 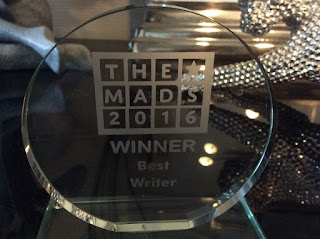 So I'm going to talk about two things. One that has happened and one that is about to happen.

Sorry, hello by the way. Oh and this is a long one, you may want to get a brew.

So, around March time this year, some butt head , or maybe a few butt heads , put me foreword for a Parenting Blog Award. The Mum and Dad (MAD) blog awards to be exact. I didn't even know there was such a thing and was raising the flesh above my eye (note I couldn't raise a eyebrow, I had non) and wondering what this would all be about. I'll be honest, other than The Unmumsy Mum and The Sun Will Come Up I've never really read any blogs. I was completely unaware that there are bloody millions of them flying around in cyber space covering everything from life with an ingrown toenail to different ways to style your dog.
The only other blogs I had experienced were a quick glance at Cancer ones, and let me tell you, us Cancer Folk can be a depressing little bunch at times.  So I was chuffed. And I thought I'd give a couple of the people who 'follow' me a chance to vote. I'll be honest, I've actually got no idea how many people read my blog.

How do you know?
I know how many 'hits'  I've had (cannot get the vision of me sucking on a bong when i say this) but regular followers? No idea.
So yeah I asked you to vote if you felt like I deserved it. Not because I've got cancer and you feel sorry for me, but if you actually thought my writing was 'best.'
Anyway, that was March / April time and they kept us hanging on until the 16th September to find out the results.
We were asked to turn up at a hotel in Laaannnddaannn Taannn  (or London) and eat some food and chuck a load of wine down our necks so of course I said yes.
My friend Lizzie and I went halves on a hotel room (it was still like 10 million pounds) and off we went.

So, it all started really well. I dumped the boys on my mum, had radiotherapy at 945am, tucked my crispy non-tit into a shitty old granny bra with my fake foam dome boob, and hauled ass to Bristol Temple Meads train station. I queued up for my ticket and the man behind the desk said "I Love your haircut by the way" My automatic response was "what?" He replied  "Your hair cut. It's nice" and I looked at him and he wasn't laughing!!!!!  He was actually being serious!!! Then I remembered.....I'm not bloody bald anymore am I! My hair has actually gone from Cancer hair to hair hair. Awesome. I realise its the first compliment I've had about my appearance that has come from someone who isn't just being nice to the woman with Cancer. It's a real compliment!!!!! So Thank you Temple Meads Man, and may I say I liked the skin you were wearing on your head too. It was lush!

So, I get to London and I meet some of my favourite people...my old work mates (I better not name them as I think they may have been scivving) and I tell them about how posh my hotel is - The Royal Garden Hotel in Kensington don't you know. When I checked in the lady asked "can I give your bags to this gentlemen" and gesticulated towards some kind of Beefeater and I blurted "why where's he taking them?" and of course she replied "um, to your room." Well Posh!!

I go to the room to get ready and I think 'wow. A shower without children opening the door and asking me what I'm doing or bowling in and taking a toddler-wee next to the cubicle which inevitably goes down the wall and across their feet.' Peace at last.
I dump all my clothes on the floor and step into the shower slamming the door firmly behind me....or so I thought.
I'm blissfully shaving my legs, a chore that has only recently re-entered my life, checking out my radiation burns and noting how I seem to have got off lightly so far. I'm carefully washing off my eyebrows, oblivious to the Tsunami that was washing across the posh bathroom floor.
Shower is turned off and I go to step out of the cubicle, I notice how shiny the floor tiles are as I can literally see my reflection. I stamp my giant hobbit foot onto the tiles and my reflection starts to 'ripple,' not unusual given the state of my body at the moment, but then my face wobbles away!!!! Oh shit!!!! Has radiation caused my face to fall off? NOOOO then it dawns on me I've flooded the pissing bathroom haven't I!  Not only that but that granny bra and fake foam dome tit are they only ones I have with me and one is fully submerged under 3inches of posh water and 'Soap and Glory' suds and the other is floating towards the heated towel rail. Bollocks!!!! I scoop up the sodden mess and dump it on the shelf behind the bog while I rush around naked in the bathroom, mopping up water with the bath mat, one tit swinging freely in the air.
I finally get all the floor water down the sink and go to retrieved the bra, foam dome and other clothes off the shelf and I shit you not, I dropped them in the bastard toilet!!!
Well, I don't have a spare!! It's 45 mins until launch and I have no spare tit and nothing to put it in. I can see visions of myself sitting in my dress talking to a real blogger and suddenly a wet bra shape emerges through my dress.
My buggery bollocks!!! I try stuffing all my clothes on the heated towel rail. Slipping the boob down the back. Too slow.....Where's the free hairdryer????
So that's what I did. I dried my shower/toilet water sodden tit and bra with the complimentary hair dryer. Then off I went. Oh actually I put clothes on first you understand. 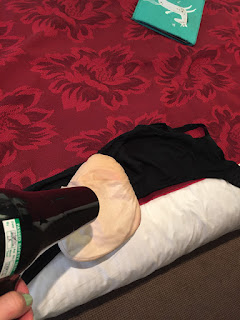 We had dinner and just before they began to announce the winners I rushed off to the traps for my millionth wee of the night and the smallest most delicate of lady-poo's ...nerves, alcohol and the lasting effects of 10 months of chemotherapy. And bless, there was another blogger throwing out much more than words....my god the poor lady. After Friday her Twitter name is probably @chundercatsarego, @vomitcomet or @leastihadabucket. Awful. I provided a jug of water and back I went.

So the awards began and there were many category's and I really enjoyed hearing about all the blogs and made notes to follow these amazing people. But by far the best part for me was when the entertainment started...and by that I mean when another blogger fell off the stage. This gorgeous blonde in a black dress went ass over tit down the back of the stage and I had a front row seat!!!!
There was a rumble and I looked over to see two sculpted legs go flying into the air, they were akimbo  and I saw a flash of black material or very dark beaver hair followed by feet and then gasps from the audience. I did what any good person would do and cheered!!!! Well someone needed to break the silence!!! I then sat down and I'm ashamed to say I howled for at least 12 minutes, to the point of tears. I'm so sorry lady with lovely legs, but your fall made my night! I salute you!! You styled it out too by waving your arms in the air, awesome.

It then got to the Best Writer category and I listened as they described this blog that showed humour despite the subject matter, bravery in the face of adversity and sheer courage. And I must say I was proud when I heard them say that was my blog. But I was also sad because I cannot believe this is my life. I often think my life is like the elaborate plot on a soap and GoogleBox lounges would scream 'oh that's crap, as if that would ever happen to one person' , but it's real and it's all true. And it's fucking awful.
But I will say again, I cannot let my little boys lives be swallowed up by darkness. I cannot let my little girls memory be clouded by what is happening to me.
So when I won the award, I cried. And not because I was greatful, although I was extremely greatful, I cried because this means I've done something positive. It will make my three children proud, and Scouse (who is already extremely proud) prouder and really all my friends, family and the virtual friends I've made who have supported me the whole way along and into the future.
I dedicated my award to my boys, my little girl in heaven and to the lady being sick in the toilet. I wish I had added stage fall lady too because she got up, dusted off her fabulous self and kept on going. I feel I can relate to that stage fall. In all manner of ways.
Ally's 8 days with us, short but electrified by love.
I decided to carry on with the documentary as Ally had a lot more to say and I could facilitate that. See, she is her mothers daughter and we never give up.

Ally is with me, always.
She was with me as I accepted my award. She was with me when I watched the documentary and I cried very hard. And she is with me all the nights I lie awake thinking of her. She gives me courage in the darkest of times and bravery in the face of adversity.
I would love it if you could watch it. It goes out in the UK and Ireland on 26th September on TLC. It's under the title 'Extraordinary Pregnancies.'

There are further dates below. These can change and I'll let you know if they do. It will also go out in USA at some point, again I'll let you know. I will also post updates on Facebook: Storm In a Tit Cup by Heidi and Twitter:  @storminatitcup

So, I sign off tonight whilst watching Poldark, looking at my award glinting from the table. 'Storm In A Tit Cup' has now been active for 10 months and I know that despite what prognosis-paperwork-crap says about me, I'll still be writing it in 10 years. Who knows if anyone will still read it and what the hell I'll be waffling about but to all you butt heads who voted and to those of you that didn't, thank you. Thank you for your continued support which never fails to choke me up. Please know I read every single comment that you write even though I don't always reply, they are all so gratefully received.

I never did see toilet spew lady again that night but she will have gone home and woken up with no memory, a mouth like a Tramps pants and the abs of a god from all the heaving but I won't forget her. A stark reminder that even in the poshest of hotels life isn't always picture perfect.

And to stage fall lady, high fucking five. Keep your pants black, or your growler hairy.... You never know when you might fall off the stage but it's getting back up that matters X