When I was first diagnosed 3 years ago on September 11th 2015, all I heard in the ‘Bad News Room’ was “Inflammatory Breast Cancer, not sure the extent of spread, 2-5 years prognosis.” As I sat there at 13 weeks pregnant, with a boy that had just turned 1 the day before and a 2 year old at home, all I could think about was how my children would grow up without their mum. If I was one of the ‘lucky’ ones and reached 5 years with IBC, the kids would be 5,6 and 7 when I died. I’d see all three start primary school, watch them swim without armbands and most likely (growing up in our house), see them nurture a love of toilet humour. In a worse case scenario they’d be 2,3 and 4. There would be one school start in which I’d die a week later, a free floating turd in the local pool and a severe underappreciation of farting.
I would be missing many important milestones in the lives of my children, whatever the outcome.
Then we had the full results of my Cancer ‘shituation.’ The spread was into my lymph nodes and lungs, then later a further spread into my blood. So, we were realistically looking at pool turds only. It was shit. But what was I most scared of?
The lack of control played a large part in my fear but the front runner was the act of saying goodbye. I could visualise those final few days when no one knew precisely when I’d die. Every time someone said goodbye to me, we would think it could be the final time. However, adults understand what’s happening. How do you say goodbye to a small child that has zero concept of the gravity of those words. What if I said goodbye to the three kids and then they had a tantrum in my hospital room because they were bored and wanted to go home and watch Peppa Pig? The last sight I would see of the kids was them wrestling to get away from me.
It ate me up.
What if they blamed me for leaving? What if they thought I’d abandoned them?  How would they feel when they called out for me in the night and I never came?
This is what is so profoundly difficult about being a mum with stage 4 Cancer. It is a life limiting disease. There is no cure. I will be on chemo or similar for the rest of my life. Fact. And at some point, I will have to say goodbye. A real goodbye. One that is final. Its dreadful. Unfair. Absolutely fucking shit. But then again, I’ve done it already. In a twist on life’s rollercoaster of unfathomable wankyness, I had to say goodbye to my daughter, Ally. I watched as she left us at just 8 days old. The most surreal moment of my life.


This coming Tuesday is 3 years since my diagnosis, 3 and a half years since Cancer arrived and I’m not dead yet. In fact in some ways, I’ve never been more alive. 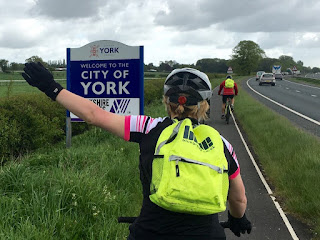 Oh and on Friday, my 3 year old Tait had his first official swimming lesson and he was brilliant. Not a pool turd in sight. That was last year..... 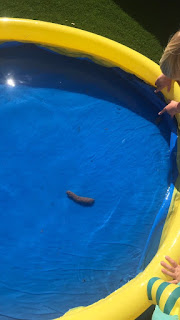 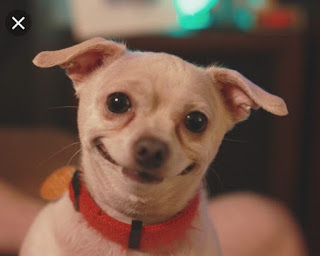 On Friday morning on my way out to start the day, I noticed a shit on my drive. I don’t mean a person of annoyance, I mean an actual colon travelled food pile. A shit. Turd. Log. Poo. It wasn’t human. It was canine. This in itself isn’t blog worthy but I’m getting to that. Call me old fashioned, but I was annoyed. Someone had allowed their dog to walk onto my driveway, squat down and lay a cable on my land! I’ve got kids that expect to be able to walk on their own land, shoeless, without fear of nuggets between their toes. It got right on my tit. So, I did what any disgruntled resident would do and went to the town Facebook page to exude some passive aggression ... 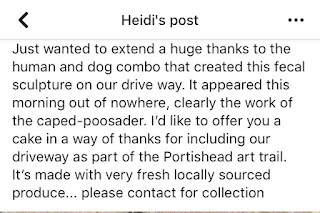 I attached this as evidence.... 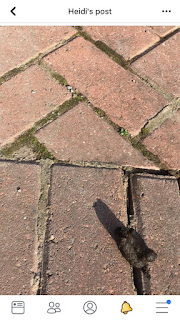 I don’t know what I was expecting really. I just wanted to say how unamused I was with the shit. I’m not annoyed with the dog. I like dogs. In fact my brother has a dog called Steve and he’s a fine fellow. No, I was annoyed with the owner. Disgusting lazy wank stain not clearing up their dogs shit. If either of my sons shat on someone’s drive, I’d clear it up.

Anyway, the comments flowed in and I got the comradery I expected, shocked emoji faces, a few poo puns which I enjoyed, Janet reminding everyone not to tar all dog owners with the same brush etc etc but then there was Brian. 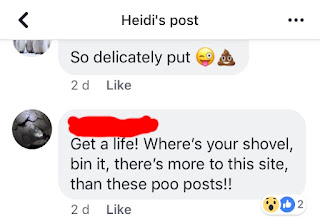 Now let’s be honest, Brian’s a bone head that failed to see the irony in telling someone to get a life for writing on social media about the shit whilst writing on social media about the shit. I love the 'moronic ironic's', they're fantastic and exactly why I love the local whinge pages. It gives a voice to the people, even the ones that wear sandals and socks in public but like to go home and dress as an adult baby.

Anyway, what did make me think was the term ‘get a life’. An idiom meant as a low level insult that suggests someone wastes their time on the mundane. Brian has no idea about my situation. He doesn’t realise that he’s just told someone with incurable cancer to ‘get a life.’ He’d most likely feel awful and a bit of a shit himself if he knew. So I simply replied with this... 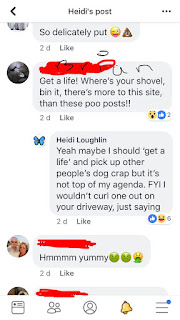 And ironically Brian himself hit the thumbs up button. 👍I like to think it was more of a touché.
What Brian’s comment did highlight to me is that since I’ve been “dying” (and I use this term for artistic value because although they keep telling me that my prognosis is 2-5 years and I’m 3.5 years in, I’m not even close to that yet) but since I’ve been "dying", I’ve never been more alive.
I travel loads, ride my horse, cycle miles and miles, have chemo, take each day as it comes, do the floss with the kids, see my friends all the time, laugh at farts, drink wine, play practical jokes and get annoyed by mundane stuff like dogs shitting on my drive.

Getting a life really is exactly what we should all be doing.

Brian my lover, I have got a life. And for that, I’m truly thankful.