But mostly I was beaming with relief.

I remember the night 2 years ago when I was told I had Inflammatory Breast Cancer whilst pregnant with my 3rd baby. I came home and I checked on Tait who had just celebrated his first birthday. He looked so peaceful and I felt immense guilt that things would never quite be conventional for him and that because of his young age that he would never look back on a time in his life when his mum didn't have cancer. I felt bad that this would be his 'normal'. I shut his door and went into the next room where Noah was sleeping. He was 2 at the time. I climbed into bed with him and cried desperately into the pillow. I felt I was going to miss out on his life. I was going to miss all his milestones and I would never get to share one of those pictures of my little lad starting school in his oversized uniform baring the logo of his new life, of his independence and really the beginning of his pathway to who knows what.
I wouldn't see that. I wouldn't know what that felt like.

And now I do know what that feels like.
Both feelings of course.
I know what it is like to take my son to school.
I also know what it's like to not have the chance to ever take my little girl to school.

But Wednesday was about Noah.
I didn't actually think I'd make this.
This is one bucket list item that I'm ecstatic to tick off.
I got to walk my little boy to school and chuffing hell was i proud!

And so, the lamb.

Noah had started school that week and Sunday was Taits 3rd birthday. Keith had taken them to 'comic con' in Bristol while I prepared the boys favourite meal of lamb with a shit tonne of mint sauce. I was 'thinking' because I'd had an actual full nights sleep and the house was empty so I guess my head was too.
This is dangerous territory for me. This is when the thoughts start to creep in. I knew that with Taits birthday followed a milestone of diagnosis. It would be two 2 years the following day that I was diagnosed with Inflammatory Breast Cancer and was staring at a life span of 2-5 years.
As I delicately massaged lemon juice into the decaying carcass of a sheep, that fucking tractor song came onto 'Spotify'. You know the one....'I'm rumbling in my JCBeeeee. I'm five years old and my dads a giant sitting beside of me' ( even as I'm typing this I'm welling up ) well it's something to do with struggling to fit in at school and the boys dad works his bollocks off on the farm all day but no matter how tired he is he's always got time for his son. They're rolling up the bypass, him and his dad having a top laugh. And I started thinking about my funeral!!!!! POP! Straight into my head, just like that. I thought what a lovely song this would be for the boys to listen to to capture how fantastic their relationship is with their dad, Keith. And because it would have been chosen by me it would become even more poignant. And this would be the song they would remember me by and although they'd be sad they'd also have these little smiles on their faces too!
AND.......well of course then the tears and snot came flooding down onto the fucking lamb. The lamb that had been enjoying a deep tissue massage for the last 10 minutes.
Then I cried because that lamb also had a family once and maybe it to had longed to drop its kid off at sheep school or something.
Oh it was awful.

And then I had to kick myself right in the ass!
Because actually this was an amazing milestone (not the leg of lamb, I'd cooked it before like). Noah had started school! I'd been there! Tait had turned 3! I'd been there. I wasn't dead! I was alive! And I'll be there for Tait to start school too because just you try and stop me!

And the lamb, even when marinated in snot, still tasted good. 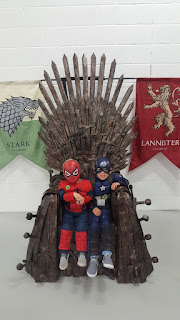 I'm up for an award ladies and gents, others. I've been shortlisted as 'Inspirational Mother of the Year' by the Butterfly Awards. I'd love it if you would take a few seconds to follow this link and vote for me by simply clicking the red heart I would be so greatful. But equally you don't have to either. I'll still like you all the same. But you'll be top of the haunting list if you don't!!!!
It's a very special event that recognises mums, dads and support networks around parents who have lost their babies. We will all be attending an award ceremony on October 14th and it goes without saying it will be a very emotional event. All these mums and dads are inspirational and talking about our babies to others is so important so I'd urge you to vote for someone whether it's me or not. Thank you xxx
Posted by Heidi Loughlin at 07:34 6 comments: