Harry Potter and My Philosophers Stone

Those of you that have read all of my blog posts and happen to be Harry Potter fans will notice my nods towards the magical Pottersphere from time to time.
The most obvious link being the name of my rotten skanky-ass Cancer, 'VolderTit.'
There were a few reasons for this name.
At Hogwarts (the wizard school) they call the Nemesis Voldemort  and 'he-who-must-not-be-named.' But It is wisely pointed out by Albus Dumbledore that 'fear of a name increases fear of the thing itself'. So I named my rotten mammary glands after him but then wondered if it was a complete contradiction? Why don't I just call it Cancer?
I'm not scared of the word Cancer, I just don't like it. It's too vague. My cancer is my cancer and I can speak for most people in Cancerland when I say that being blanketed by muggles is one of the most frustrating parts of explaining cancer....

But there are so many cancers, and then there are aggreviatung factors to cancers such as hormones, or lack of hormones. Then different metastasis (spread of cancer)   and therefore you'll find it difficult to actually match two people with identical cancers, life expectancies etc.

Oh and yeah we call you muggles. We do!!! Non Cancer folk. You don't live in Cancerland...that is not to say that you don't have your own shit going on though. It's just how we refer to you.

It's not meant in a nasty way. We love you. And love that you ask questions. We just also like to make fun and laugh because let's face it... Cancerland is a pretty shit place to be and a little humour goes a long way.
I also want to point out before someone calls me a muggle-ist that I happen to know lots of muggles, I'm even friends with some, and live with them, so there!!

I grew up reading the Potter books...that's to say I was about 18 when I got hooked but I believe you spend your whole life growing up. Changing, evolving. I don't know many people that just stay the same when they hit 21. Do you?
I used to go to ASDA at Cribbs Causeway at midnight when the books were due out. I would stand hip to shoulder with all the little wizards and witches of Bristol, waiting for the spotty night shift kid to wheel out the trolley of books. Then I'd grab mine, fly home and read it until I fell asleep. I'd get lost in the world of spells, magic and fart flavoured jelly beans and it really made me feel excited, like anything was possible. It probably sounds nobby and sad but screw you, I loved that world.
And that love never went away.
The films started coming out and the wizarding world was brought to life. Incredible. The train to Hogwarts alone was fantastic. I spent actual time working out where Hogwarts was.......'If the pupils boarded the Hogwarts Express at 11am in London and arrived in the dark in September which I worked out was around 8pm then it must be Scotland somewhere. But then The Hogwarts Express is a steam train right? So it must travel slower than a First Great Western train? But then again it's got magic on its side and has less piss-stinking toilets.

As I've continued to grow up I've never seemed to lose the love for Harry and Co. I found myself announcing to the room one day when i needed a poo that I was off to 'conjure a Patronus.' This sat nicely alongside some of my favourite poo announcements... 'drop the kids off at the pool,' 'lay a cable,' 'curl one out,' 'drop anchor in poo bay' and now since the addition of kids I like 'Dumplestiltskin.'
One of my friends was telling me the other day that when you do a poo and you look down afterwards and it's gone and then you wipe and there's no proof that it actually happened and wiping becomes unnecessary then it's called a 'Ghost poo' or a 'ghostie.' She said her young daughter had gone to the toilet and when she shouted up to offer paperwork assistance she replied "nah don't worry, it was just a Ghostie". I love kids.
Now that I have terrible bum manoeuvres (can't stand the term bowel movements) when I feel the warning rumble of an imminent poo-Nado it is not uncommon to hear the running of my feet to the bathroom and my mouth declaring 'expecto patronum'.
It really takes the edge off the awkwardness of pebble dashing someone's toilet.

Anyway, I digress.
Over the last few months my cancer, VolderTit, has spread again so I've changed drugs to Kadcyla which is now currently my 'Elixir of life',  my 'Philosopher's Stone' and this drug can add an average of 9 months to the life of someone with secondary breast cancer. Those 9 months are crucial.
Can you imagine being told you will die? I know we all die, but when a Dr tells you it'll be sooner then you think, you do shit yourself a bit. And 9 months......it doesn't sound like a lot does it? But to someone to whom every minute counts, it is. 9 months gives someone the chance to set their affairs in order. To write letters to their children, to say those goodbyes in all the ways they'd like and to show their other half where the mop is kept.
This is a very important drug that has had amazing effects. I can physically see on my skin where the Cancer used to be, has now cleared. Imagine being able to watch Cancer growing up your body like Creeper Vines up a house? See it traveling across your skin, spreading over you? It's scary. I conjured an enormous patronus when I saw this happening. Then, when given Kadcyla I saw it in reverse. I saw it slowly reduce and fade. It will return, we know this but at the moment it's at bay. I have been bought time. There is no more precious a gift then time.

Now they are on about taking Kadcyla away from some women with secondary breast cancer because it's too expensive. If this happens these women will likely die quicker. If Kadcyla wasn't given to me in September then I could be so much closer to death than I am now. I'm not sugar coating it, this is fucking serious. Please sign the petition on my Facebook page 'storm in a tit cup by Heidi' or go to the Breast Cancer Now website.

Now, as if by magic Keith and I attended the London Premiere of the new JK Rowling film 'Fantastic Beasts and where to find them.' We arrived at Leicester Square and saw hundreds of fans dressed up ready to see JK and hot Eddie with the red mane. (This man is representing us Gingers impeccably)

Whilst in the lift at our hotel a posh American lady asked me what all the homeless people were queuing for outside in Leicester Square. I explained that this was in fact a large collection of Hagrid's and Dobby the House Elf's which is just, you know, standard British behaviour. She looked at me like I was 'Fluffy.' (The three headed dog that guards the Philosophers Stone) 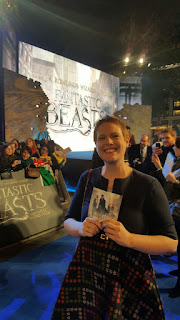 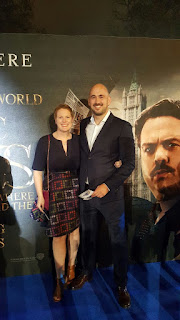 We walked down the red (well it was blue) carpet and there was JK!!!!! Just next to me. So close I could have poked her with my wand but I didn't. I was too shy. I wanted to go over and tell her how amazing she is but she hears that constantly. I wouldn't have time to tell her all the stuff I've told you...about VolderTit and also how poignant her writing is. How wise.
I wanted to tell her how much i want to stay alive long enough to read the books to the boys. About how I'm thinking of recording my voice reading the books just in case I'm not.
I wanted to tell her that Albus Dumbledore says one of the wisest things I've heard or read.
In fact this mantra is something that Ive carried in my head constantly since VolderTit landed in my life and even more so since the death of my daughter Ally.

"happiness can be found, even in the darkest of times, if only one remembers to turn on the light"

To lose my daughter, my darkness. To live for my sons, my light.

Keith and I went to the after party. There was a book shelf full of doughnuts, a wall of sandwiches and an entire bar full of sweets!!! It was amazing. Grown adults stuffing sweets in at a hundred miles an hour. Pure bliss.