That's not right is it? Men talk about their feelings? Do they really? I'm not convinced.

Now I'm well aware of the sweeping generalisations I made in that last paragraph, it's kind of the point to this slightly different post.

When Neanderthal man walked out the cave scratching his nuts do you think his first activity of the day was a group therapy session around an animal carcass, discussing his feelings?
No.
While Wilma was out the back dragging her rags down a bumpy stone to achieve perfect whites whilst chatting to Betty about BamBams use of the 'F' word, Fred was pissing on flintstones showing his prehistoric nob to his mates. 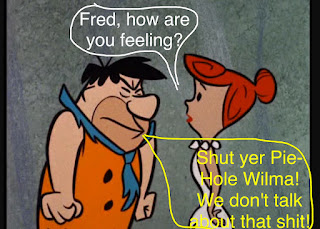 When I was diagnosed with Inflammatory Breast Cancer last September while pregnant, the ass end fell out of our world.
Along with 10,000 trees worth of leaflets, I left the breast clinic with a list of online support groups that would carry me through everything from chemo induced ass wing-nuts (or haemorrhoids) to the fear of imminent death.
I logged on that night and had every questioned answered that I needed, immediately! I was given tips, advice and weird suggestions but by and large a feeling of support. I wasn't the only one in the world facing this. I was able to blurt out anything and have an answer immediately....
Does your growler hair fall out?
Will I lose my teeth?
What do you think happens when you die?

I have been through diagnosis of a very rare and extremely aggressive cancer, chemo in pregnancy, premature birth, the heart exploding loss of our daughter, a secondary diagnosis to my lungs, radiotherapy, mastectomy and a further secondary spread to my skin. I can honestly say all these things have support groups but where oh where is Neanderthal man in all this? Is he out the back waxing his arse with fermented berries not giving a shit?
No he's not. He's sitting on his feelings, quietly dealing with his shituation alone. He's in the cave. And the cave is a very lonely place.

You see he has spent all his time supporting Wilma. Wilmas mental health is quite astounding considering the horrors she has faced. She has Betty to talk to. She also has all the other women surrounding her. It's ok for Wilma to talk over a bone, with anyone.

But Fred? Well he's screwed. You see some stupid twat thought it was a great idea to start a rumour that men don't share their fears and feelings. Instead they created a role for themselves as protector but gave themselves no room to be a human being.
Fred doesn't talk.
Fred didn't get any leaflets. 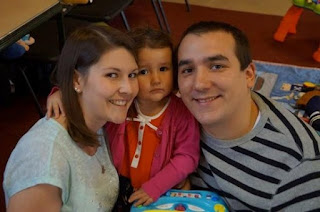 Jamie, whose wife Kellyanne has incurable Cancer recounts the following:

"They passed me a bag of her possessions, including her wedding ring, and told me she would need major bowel surgery and they would call me when it was over.

That was the first of 3 occasions I’ve had to watch Kel disappear through a door for major surgery not knowing if she would come back out again.
Kel and I are just 31 years old. Reading this I imagine everyone is thinking the same thing – this is absolutely shit.
Over the last few years I’ve met and read about so many women who have gone through what Kel is going through and witnessed incredible courage and endurance in even the most terrible of situations . However very little is written from the perspective of the partner.
Specifically what i wanted to touch on is the stereotype that men are too macho to talk about their feelings. Most people who know me will probably say the same thing which is along the lines of ‘he deals with it all really well but he doesn’t really talk about it’.
Is that because i’m ‘too manly’ to talk or show emotion. Nope! Of course I get upset about it – i cry regularly about it but just because i don’t show it in front of people doesn’t mean i bottle it up." Jamie from MummysStarMen    (Click here for the full article)

Jamie clearly identifies the importance of avoiding being Fred. As does Pete Wallroth who created the charity Mummy's Star in honour of the memory of his beautiful wife Mair. 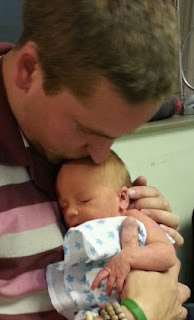 "Now bear in mind, as a person I have sought support when required in the past. I have never hidden my emotions. I have never been afraid to cry, I have never seen counselling or any other form or support as a sign of weakness. In fact I think each and every one of us could benefit from a few hours counselling even if we don’t think we need it.
So, the idea of seeking support when I most needed it should have been a given for me…..but yet I didn’t. I didn’t say a word. I didn’t want to worry family, I didn’t want to seem weak to friends and I most certainly didn’t want to show it to Mair. Surely it was the last thing she needed?
Wrong!
It was a relief to her. One night while I had Merlin propped up on my knees with Mair sat beside me on the couch, I stared as his little face sleeping and tears started running down my face. How could I begrudge this little guy, Our baby sunshine my love and attention. Tears turned to sobbing and before long I was crying my eyes out in Mair’s arms. I broke down.
“How are you supposed to look after them and me, if you don’t look after yourself?” she asked.
I remember uttering something along the lines of “I can’t, I’ve not got time” to which I think she responded with something along the lines of “Bloody hell I’m not that sick that I can’t have them for 2 hours!” with a smile on her face then gave me another massive hug.
And that was it. The next day I rang a local day hospice that Mair had also been going to and I made an appointment with Jacqui and at that appointment I balled by eyes out again.
And you know what. It didn’t take the situation away. It didn’t remove the cancer from our lives, It didn’t magically create some home help…..but it got it out of me that yes I struggled and it felt good. It was like opening a valve and letting some air out. The difference between a slow puncture or a complete blow out on the motorway doing 80!" (Click here for the full article)

My Keith has propped me up, our kids up, my mum and himself since this all started and I will honestly admit that I've neglected him. I was far too wrapped up in what was happening to me to really consider my Fred.

I like to think that nowadays I'm a little bit more aware of Keith's feelings. He is in this with me but  he is also carrying me (not an easy task when I weigh 40 stone and have a meatball subway hanging out my mouth).
BUT I am worried about all the men out there that are stuck in the cave with only their smelly shoes, hairy arses and skid marked pants for company. There will be men across the UK punching holes in their caves, quietly sitting on the pain of supporting a loved one who is critically ill.
Pete, Jamie, myself and a whole lot of others want to give men a place to chat and get themselves out of the cave.
Please, if you know any man that has a loved one who is ill, share this post with them. They just need to email Pete directly at pete@mummsstar.org and he will invite them to the 'man forum'.
When you tell The Fred's about the group they may tell you to piss off and that they don't need support  but they may secretly sneak on there and just not tell you, Fred stylie. They can retain the image of Fred without being Fred.
No one should feel they can't talk to anyone.
Get Fred out of the Cave xx
Posted by Heidi Loughlin at 12:31 18 comments: 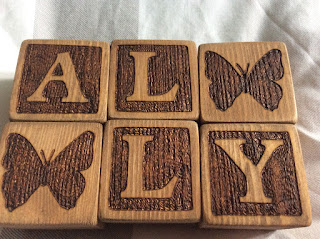 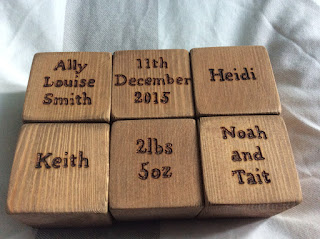 A year ago today you came

You did so well, the Drs said
But then you left. An empty bed
We love you more then words can say
Forever beside me. Happy 1st Birthday 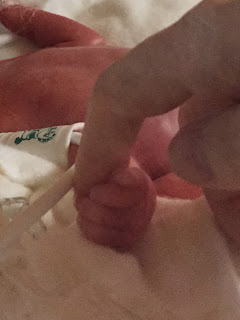 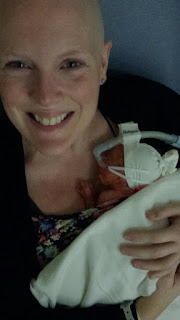